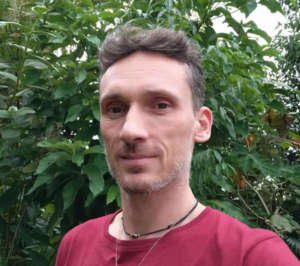 Aurélien Olichon has obtained his PhD in March 2004 at Toulouse University. He worked in the group of Pr. Pascale Belenguer together with a passionate research scientist, Dr Guy Lenaers. Together, they paved the way to understand the link between an intramitochondrial dynamin, OPA1, and a genetic disease, Autosomal Dominant Optic Atrophy. Then, Aurélien moved in April 2004 to Thomas Surrey’s lab at EMBL in Heidelberg and started a post-doctoral project for which he established the camelid VHH antibody phage display technology to isolated nanobodies targeting several antigens, including microtubules and associated proteins involved in mitotic spindle dynamics, or rotavirus bloking nanoboides. From September 2008, he was  assistant professor in biochemistry and molecular biology at the pharmacy faculty of the University of Toulouse. Meanwhile, Aurelien spent 12 years in Pr Gille Favre’s lab at the Claudius Regaud Institute and the Toulouse cancer comprehensive center CRCT. There, Aurelien developed a fully synthetic nanobody library. He grew his expertise in recombinant antibody technology by selecting several highly selective nanobodies toward RHO GTPases active forms, and established tools for in vitro or in cellulo assays such as immunoassays, biosensors or targeted protein degradation. Aurelien moved in September 2020 to the university of La Réunion as an assistant professor in pharmacology. He joined the DeTROI lab in which he will carry on engineering nanobody-based sensors and target cardiovascular and inflammatory diseases biomarkers.